Is a supercharged domestic aviation market a real prospect?

For all of 2019, over 11.3m overseas trips were taken by Australians.  Bali alone had 1.4m Australian visitors.  The largest purpose of travel segment in 2019 was holiday at 57%, followed by visiting family and friends making up another 26%.  If current interstate travel and other restrictions remain in place, regional and domestic travel will become heavily reliant on assistance packages and other forms of support to survive.  If, however, we’re able to beat down COVID-19, and the domestic market were to re-open, what would be the benefits to regional and domestic aviation?

According to recent analysis and data from the OECD, domestically, the regional aviation sector and tourism offerings could benefit substantially with closed borders internationally to Australian’s.  The domestic economy could benefit considerably, as shown in Figure 1.  However, it might make it challenging to address seasonality issues leisure offerings have or when many want to take holidays at peak times.

Figure 1: Gains or loss in tourism spend for selected countries

To make best use of an enlarged domestic market, airlines locally will need to be ready to offer more flights, to more destinations.  Regional jets, turboprops and the like provided 10.8m seats and 230k flights to destinations across Australia in 2019 – almost the equivalent of those residents that travelled abroad.  In overseas markets, where restrictions have eased, and locally here in some states, evidence has pointed to leisure travel returning faster than business or corporate leisure.  With most international markets closed, domestic markets have seen surges in demand.  In the New Zealand context, in easing restrictions, domestic travel demand leaped.  Meanwhile, in the US – initially, leisure travel was at the forefront of that markets early enthusiasm to return to the skies.  Locally here, airlines such as Fly Pelican and Alliance Airlines started new services between destinations that had been previously unserved.  New route pairings emerged such as Canberra  Ballina and Sunshine Coast – Cairns.

In the last week, the domestic market anticipation of more opportunities received a shot in the arm, powering expectations of growth with the news that Alliance Airlines has secured a clutch of new regional Embraer aircraft with deliveries starting in September.

New routes between previously unserved or underserved destinations are being rigorously explored.  With the right nexus between the three key partners to growing a destinations connectivity – the trinity of area, airport and airline, and with the prospect of few travellers able to leave Australia, a very large new domestic market could emerge.  As shown in Figure 2, a large number of new markets could be connected with Alliance Airlines new jets being delivered and various partners having the ambition and desire to better serve their resident populations in their catchments. 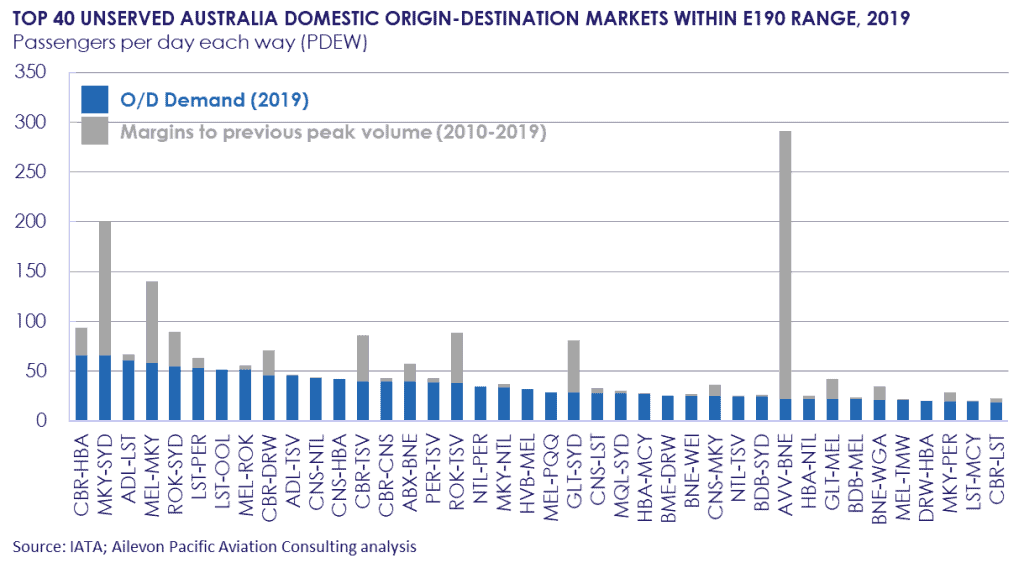 Regardless of the potential of new routes, some airlines are already charging ahead, adding more seats and capacity, or serving new destinations where key partners have shown the express desire and support to secure these new or added services.  As can be seen in Figure 3, some airlines are growing at breakneck speed, while others (generally those larger in nature) have not yet re-instated schedules.  Not hardly surprising due to the ever-changing complexity of border closures and changes.

Alliance’s September 2020 scheduled seats is 157% of September 2019 seats with FlyPelican 153% of the same month last year.  At the other end of the spectrum, Fly Corporate is at only 25% of their 2019 seats.  To illustrate the point, as to how dynamic schedules remain, Jetstar’s schedules are showing their capacity will be slightly up on last year – although next weeks reloaded schedules is likely to paint a very different picture for all airlines. 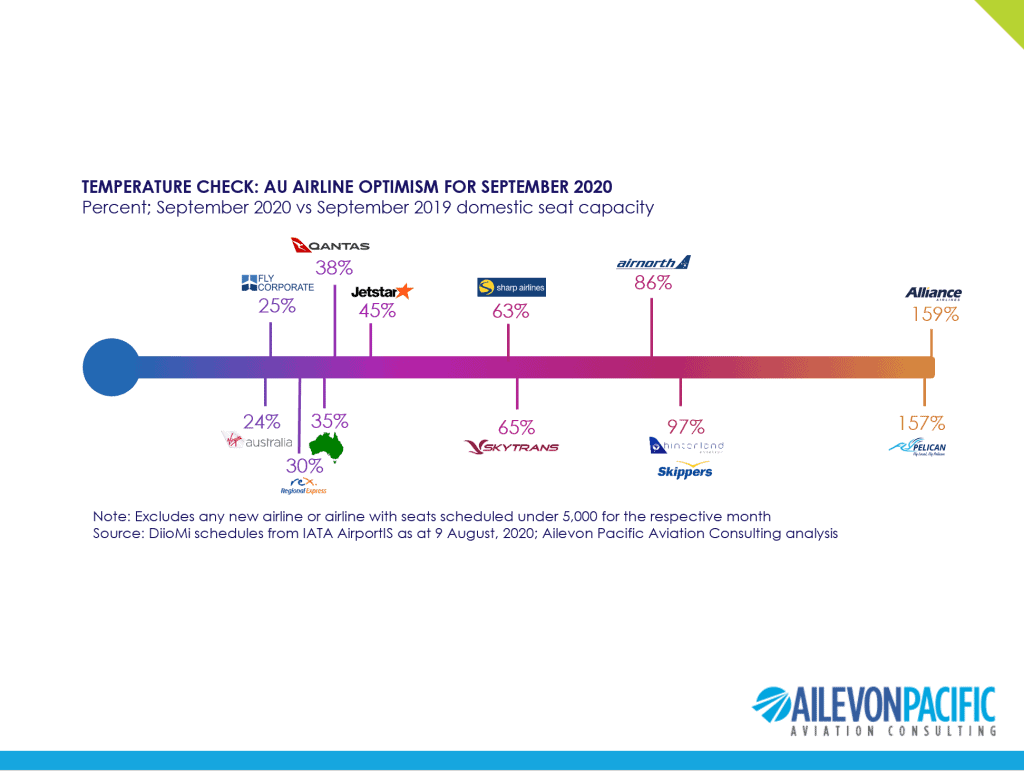 Overall, Australian domestic September 2020 schedules seats according to IATA AirportIS is shown as being down 3.4m seats or 49% of September 2019 – still some way off returning to growth or being supercharged.  However, higher than previous growth is shown to be in subsequent months in the forward schedules, which is very encouraging, and coupled with new aircraft deliveries and airlines including REX having touted the prospect of new aircraft, one can hope growth and better days ahead exist in the regional and domestic aviation market.