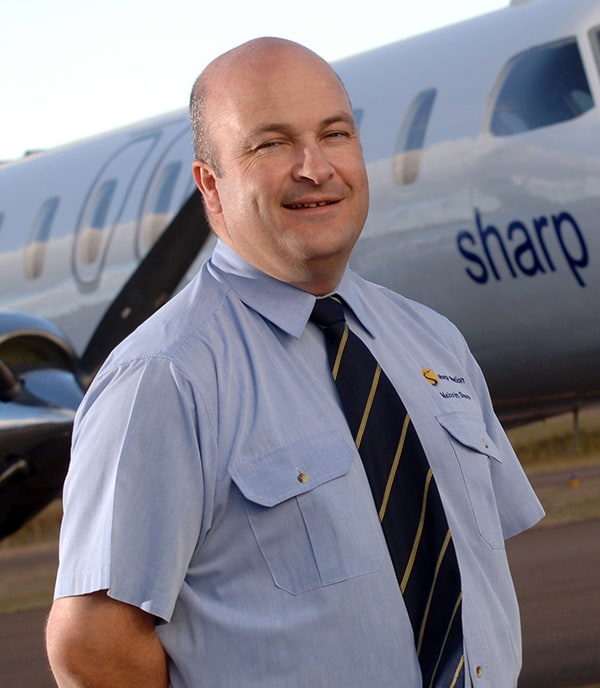 Malcolm Sharp was born in Hamilton, Victoria in 1966 and grew up in nearby Branxholme. In 1983 at the age of 16 he commenced flying training with the Wimmera Aero Club at Hamilton Airport, gaining his Private Pilot’s Licence later that year. The following year he was elected school Captain and successfully completed his HSC at Hamilton High School.

From 1985 – 1987 Malcolm worked in the construction industry on the Portland Aluminium development, this allowed Malcolm to fully fund his Commercial and Airline Pilot training which he completed in Sydney.

Today Sharp Airlines employs over 100 employees, operates in 6 States and carried in excess of 100,000 passengers and 1 million kilograms of freight in 2019 in FIFO Mining, Freight and Airline operations. Currently Sharp Airlines operates a fleet of 22 Metroliner and Cessna 441 Turboprop Aircraft.

Malcolm is the Non-executive Chairman of the Regional Aviation Association of Australia (RAAA) and was Chairman of the Technical Working Group (TWG) for 5 years. In July 2020 Malcolm was asked to join CASA’s Aviation Safety Advisory Panel (ASAP) for a 2-year appointment. His qualifications and experience include ATPL, Head of Flight Operations, Approved Testing Officer and Head of Training and Checking. He also currently holds the position of Accountable Manager for the Airlines Part 145 Engineering Division. Malcolm has over 37 years and 17,000 hours of flying experience in commercial operations, including Regional Airlines, Corporate and General Aviation.

Malcolm is married to Jane and they have a son Jack who is 18 years old and now lives in the township of Wannon near Hamilton. He is a keen aviator, frustrated golfer and enjoys the wider outdoors.